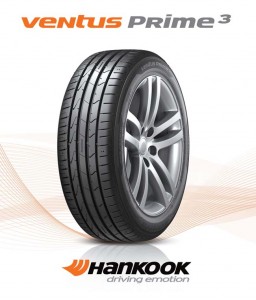 The latest generation of Hankook Tire, ‘Ventus Prime 3’ (K125), ranked the first place among 50 brands with the size of 205/55R16V at AutoBild Summer Tire Test 2016. The cutting edge tire has been appraised for best driving performance on wet and dry surfaces, along with fuel efficiency.

The high-end model of Hankook Tire, ‘Ventus S1 evo2 (K117)’ especially got recognized as the best tire for wet roads at Summer Tire Test of Autobild Sportscars 2016. ‘Ventus S1 evo²’ has proved its strong performance in various aspects including noise, handling, braking on both dry and wet roads with 255/35R20 front and 295/30R20 rear sizes.

Seung Hwa Suh, Vice Chairman & CEO of Hankook Tire said that “All of us at Hankook Tire are extremely proud of the scores that our ‘Ventus Prime 3’ and ’Ventus S1 evo2’ achieved. We believe that it is a result of Hankook Tire’s consistent commitment in technology advancement.” He added that “Hankook Tire will continue our dedication to make innovations in product performance in order to deliver the utmost driving satisfaction for our customers”.

AutoBild Sportscars, first published in 2002, is the leading German sports car magazine which is a sister magazine of Autobild. With the circulation of 115,800 copies, the monthly magazine is considered as the benchmark in testing expertise by conducting tough comparative and individual test from the potent small cars to vigorous SUVs as well as sport tires.