Cooper Tire Europe will once again be well represented in the upcoming 35th running of the Dakar Rally, which begins on January 5 in Rosario, Argentina. Catalan rally ace and Cooper Europe 4×4 ambassador, Xavi Foj, is looking for his third successive T2 Production Class title on Cooper rubber, while the Race2Recovery team returns to build on its impressive achievements in 2013. 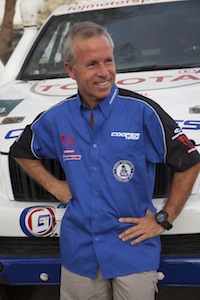 Spaniard Xavi Foj, who was recently unveiled as 4×4 brand ambassador for Cooper Tire Europe, is the most experienced Dakar Rally racer of all time, having competed a remarkable 24 times. Foj has used Cooper Discoverer S/T MAXX tyres since 2012, having previously used the manufacturer’s Discoverer STT tyres.

Since making the switch to S/T MAXX rubber, which offers a better adaptation in sandy soils, Foj has enjoyed great success, winning back-to-back T2 production class titles in 2012 and 2013 and he’s aiming for the hat trick in 2014.

Also returning to South America on Cooper tyres is the Race2Recovery team, which made history in 2013 to become the first-ever disabled team to complete the legendary Dakar Rally.

Predominantly made up of injured servicemen and acting under the banner ‘Beyond Injury, Achieving the Extraordinary,’ the team, founded by Captain Tony Harris, will field two crews in the 2014 event.

Harris will race alongside Quin Evans, who has successfully completed the Dakar Rally seven times, while the other vehicle will be manned by Ben Gott and Philip ‘Barney’ Gillespie.

Both crews will run Cooper Discoverer STT tyres, which are ideally suited for the mixed surfaces of the Dakar Rally course; the tyre’s aggressive tread design extends far down the sidewall to enhance soft traction and provide additional “bite” in rock climbing applications.

Looking ahead to January, Harris is hoping that the team’s experience will pay off and aid them in 2014, saying, “Knowing what we’re going into should certainly help us; tiredness was a really big issue for us last year, but now we know that, we can do more to prepare ourselves. As well as that, it’s been a case of working with our co-drivers to build up the trust and relationship that will see us through.

“This year, the course features longer marathon stages, which should also play to our advantage and the vehicles have also been stepped up in terms of development. We’ve not done as much testing as we’d have liked, but there’s definitely a difference in performance.

“Ultimately, we’re now just raring to go – we can’t wait to be back in Argentina to do it all again.”

Sarah McRoberts, Marketing Manager for Cooper Tire Europe, underlined the challenges that the Cooper-backed crews face, saying, “The Dakar is the toughest of all the cross-country rallies. Crews need incredible stamina – both physical and mental – to make it through the demands of the event.

“Tyres are extremely important in all forms of motorsport and, for a long, tiring event such as the Dakar Rally, which sees entrants faced with a range of challenging terrains, tyre choice is vital. This is where Cooper’s off-road offering really comes into its own, as our tyres are ideally tailored to offer soft traction and the dispersion of stones and other objects.

“We’re thrilled to be part of Xavi Foj’s quest for a hat-trick of T2 Class titles; he’s an integral part of our team as 4×4 tyre ambassador and no one knows the challenges of the Dakar better than Xavi. It’s also great to be supporting Race2Recovery once again; their efforts and achievements in their maiden Dakar Rally were awe-inspiring, so it’s great that they’re back for another go in 2014.”

Widely recognised as the world’s most gruelling motorsport challenge, the Dakar Rally sees competitors across a range of classes take on the toughest terrains, from hard, rocky surfaces to fine sand, called ‘fesh fesh,’ over a course of more than 8,500 kilometres.

For 2014, the Dakar Rally will begin in Rosario, Argentina, on January 5. From there, competitors will venture into Bolivia, before heading south into Chile, where the rally will end on January 18.