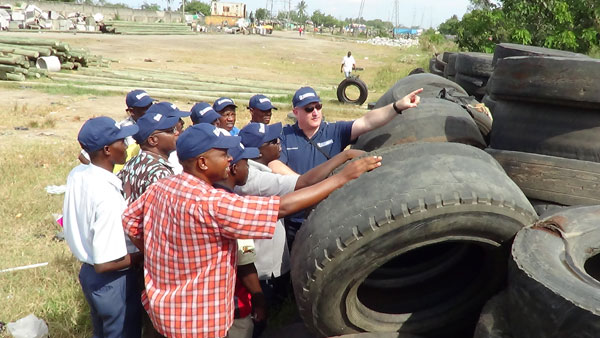 Carl’s training input formed part of Transaid’s Professional Driver Training Project, which sees the charity work closely with the country’s National Institute of Transport (NIT) to improve road safety and save lives. Attending the course were commercial vehicle driver trainers and regulatory and law enforcement agencies, including representatives from the Tanzanian Police Force.

Speaking on his return, Carl says: “In my first week there were 11 people on my course. In week two I started with 13, but within 24 hours this had grown to 18; it was comforting to know people were spreading the word and actively wanting to attend.

“Some of the most valuable lessons came when we ventured outside to escape the intense heat of the classroom. On one occasion we found a commercial vehicle tyre which had suffered from such extreme under-inflation it had delaminated. It was a shocking sight, but helped to put the theory I’d been teaching into context.”

Carl found tyre repair standards differed wildly to the UK, with plug repairs and the use of liquid sealant commonplace, plus sidewall repairs are frequently undertaken. He used his experience to explain why sidewall repairs were not advised due to flexing, gaining an undertaking from the group to avoid such repairs in the future.

“The two weeks were challenging, but also thoroughly rewarding as the groups were so receptive to what I was teaching. By the time I left I felt they had a firm grasp of the importance of tyre inspections and the need to enforce existing regulations.

“I also met some incredible people during my time in-country. I wouldn’t hesitate to recommend this experience to my Michelin colleagues in the future,” adds Carl.

Gary Forster, Chief Executive of Transaid, says: “Carl’s training in Tanzania has helped us reinforce the message that adhering to basic rules of tyre inspection and maintenance can improve safety and reduce the number of road traffic crashes. Everything the group learned will be cascaded to colleagues across the industry and to future trainees at the NIT. You can’t put a value on this training; it’s going to save lives.”

Transaid’s support of the NIT in Tanzania is an extension of a similar project run in Zambia – originally launched by Transaid’s patron, HRH The Princess Royal, in October 2008.

The Professional Driving Training Project is designed to help make commercial drivers and those working in the transport industry better skilled and safer, teaching them a greater understanding of the many risks and creating self-awareness of their impact to other road users.

For further information on Transaid’s projects in the developing world please visit www.transaid.org