Trelleborg will showcase its innovative TM700 ProgressiveTraction tyre for the very first time in Latin America at Agrishow 2015, the only trade show in Brazil for small, medium and large agricultural manufacturers, held in São Paulo, Brazil, April 27 to May 1. 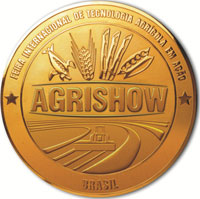 Taking centre stage on Trelleborg’s 150 square metre stand at the 22nd edition of Agrishow will be the TM700 ProgressiveTraction. Engineered according to the company’s BlueTireTM technology, the TM700 ProgressiveTraction is the latest addition to Trelleborg’s comprehensive range of radial tyres that optimise the efficiency of farming operations thanks to excellent traction, superior self-cleaning and extra mileage.

The TM700 ProgressiveTraction tread is significantly enlarged ensuring an up to 18% wider footprint, excellent floatation performance, unrivalled traction and fuel efficiency. This results in maximum crop yields, while preserving soil from compaction and erosion.

Paolo Pompei, President of Agricultural & Forestry Tyres at Trelleborg Wheel Systems commented: “With over 160,000 visitors and 800 exhibitors annually, Agrishow 2015 is one of the largest agricultural technology trade shows in the world. With that in mind, the show provides the ideal platform to bring our comprehensive range of radial tyres, engineered for the agricultural industry, directly to those that could benefit from them the most, in Latin America – one of Trelleborg’s key markets for tyres.”

Trelleborg’s popular TM1000 High Power and TM3000, specifically developed for harvesting applications, will also be featured on stand. In addition, visitors will be given the opportunity to see the size 15×6.00-6 TL 2PR in Trelleborg’s new GARDENER range for turf applications first hand. The new GARDENER boasts a new tread that assures softer traction and maximum respect for green areas.

Finalists were selected by a combination of a public vote, a vote amongst key agricultural machinery sector media and analysis by a technical jury. The ‘Trator do Ano 2015’ prize will be awarded to the finalist that receives the highest score from the technical jury. While the finalist that receives the most votes from key agricultural machinery sector media will take home the award for ‘Design of the Year’. A prize drawing will also be held at the show for those who took part in the award scheme’s public vote, which received over 25,000 votes.