Home  »  News   »   Tailpipe particle emissions may be dominated by tyres

According to the experts at Emissions Analytics, tailpipe particle emissions may now be dominated by tyre wear.

When you think of vehicle emissions, you naturally think of the exhaust pipe. But the newest internal combustion engine vehicles are achieving pollutant emission levels so low they are hard to measure.

Significant carbon dioxide still comes from the exhaust, but this does not affect urban air quality.

Arguably the biggest source of pollutant emissions from new vehicles now comes from non-exhaust sources, especially brake and tyre wear. Emissions Analytics has concentrated on the latter, as tyres are likely to be a large and growing source as consumers switch to bigger and heavier cars.

Research shows they contribute to microplastic marine pollution, as well as air pollution from finer particles. Emissions Analytics says this source of pollution is currently unregulated.

The 2019 report Non-Exhaust Emissions from Road Traffic by the UK Government’s Air Quality Expert Group (AQEG) recommends “…as an immediate priority that non-exhaust emissions (NEEs) are recognised as a source of ambient concentrations of airborne PM, even for vehicles with zero exhaust emissions of particles.”

In the light of this, Emissions Analytics has begun a broad tyre testing programme. 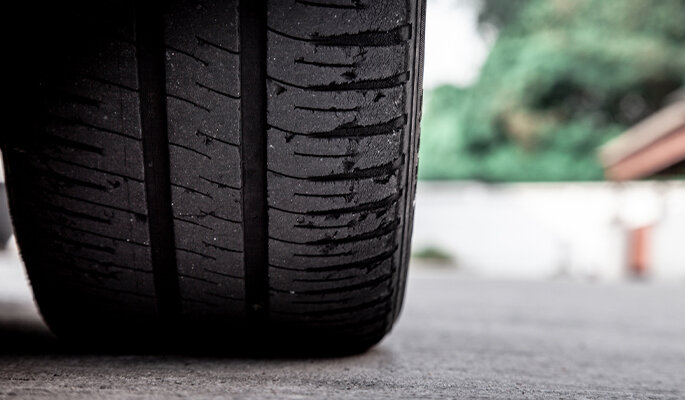 Complementing this is its traditional expertise in exhaust emissions, which will focus on diesel exhaust particulates and some further reflections on the particle emissions of gasoline engines.

Declining tailpipe emissions from diesels
when it comes to diesel vehicles, Emissions Analytics says the truth is that they have emitted very few particles, at least in relative terms, since the broad introduction of diesel particulate filters a decade ago. So long as this filter has not malfunctioned or been tampered with, emissions are low over typical driving cycles, even taking into account the significantly elevated levels during the periodic ‘regeneration’ of the filter where the accumulated particles are burned off.

Filters are so good that Emissions Analytics has measured that in certain circumstances, when the ambient air is already polluted, a diesel car will tend to extract more particles from the air than it emits. Emissions Analytics worked with European automotive publisher, Auto Motor und Sport, to test four recent models of diesel cars.

Considering one of the vehicles, a canister of high intensity particles was opened in front of the air intake on four occasions across 60 minutes while the car idled. Upon the canister being opened, the particle number soared tenfold in the ambient air, but the corresponding exhaust count remained largely flat throughout the hour, with even a slightly declining trend. 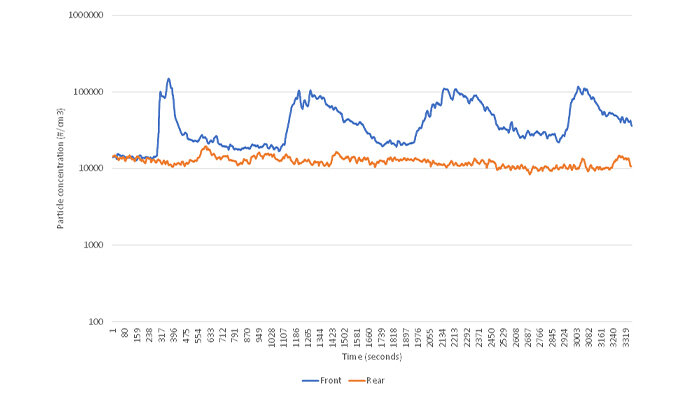 Then Emissions Analytics ran on-road tests across the four vehicles, measuring exhaust particles from cold start, at neutral idle, with a warmed-up engine, under heavy load and finally during the filter-regeneration process. The test data was then analysed into illustrative trips of 300, 30 and three kilometres to simulate highway, commuting and local errand duty cycles:

The average per-second tailpipe emissions in the various operating modes across the four vehicles were:

The standout result is that the net contribution of each car to particle pollution rests primarily on the ambient air, reflecting the dynamic way in which a car ingests air as well as exhausts it.

On a polluted day where ambient concentrations of particles are already high at 50,000 #/cm3, the vehicles remove on average 27,984 particles per second of operation. Conversely, on a clean air day when ambient concentrations are 10,000 #/cm3, all four vehicles are net polluters but at low levels in relative terms, averaging emissions of 12,016 particles per second of operation. This was across the 300km drive cycle.

During the 30km, middle-distance test with filter regeneration, all four cars are net polluters except on the dirtiest days for two of the vehicles. The latter detail is an important measure of the still relatively low absolute levels of particle emissions, albeit higher by a factor of 10 compared to normal operation.

For the ‘short errand’ 3km drive, the filters work exceptionally well. A completely cold particle filter is not inhibited, unlike SCR systems, which are highly sensitive to operating temperatures. On the ‘short errand’ route two of the vehicles were ‘net cleaners’ even on a ‘clean air’ day.

Emissions Analytics made no comment about nitrogen oxides (and other gaseous) emissions from diesel vehicles, or the stark reality in many cities of a considerable stock of older, non-filtered diesels that are often very high particle emitters.

Emissions Analytics says it recognises that it only tested one element of the overall diesel equation, nonetheless these tests raise important questions for the industry at a pivotal moment in drivetrains. To broaden the analysis, we must also consider gasoline particulate emissions, which have risen steeply as port-injection engines have been replaced by direct injection engines in an attempt to reduce CO2 emissions. This technology, which has been around since at least 2007, has become the norm rather than the exception.

Emissions Analytics says this matters hugely, given that in the four years that have followed the start of the VW ‘Dieselgate’ scandal in September 2015, diesel registrations across Europe have fallen from a peak market share of 51 per cent in 2015 to below 30 per cent by the end of the third quarter of 2019, according to the European Car Makers Association, ACEA.

Simultaneously, there has been a shift in the complexion of gasoline engines towards GDIs, which now make up approximately half of the market.

While the balance of non-diesel sales has fallen to alternative fuel, hybrid and electric vehicles, and gasoline cars, 3rd Quarter sales in Europe in 2019 showed gasoline cars still outselling full battery electric cars by 29:1. Gasoline now accounts for 59.5 per cent of the European market, while all the other alternative, non-diesel categories (electric, hybrid, mild hybrid and natural gas) only amount to 11.3 per cent.

The subject of gasoline exhaust emissions is a complex one, and under Euro 5b (since September 2011) the European limit of 4.5 mg/km PM (mass) and 6.0 x 1011 #/km PN (number) has resulted in some but not all gasoline models being fitted with particulate filters.

Emissions Analytics says we should note that the nature of particles emitted by diesel vehicles and gasoline vehicles is slightly different. In general particles from GDI engines, while high in number are really quite small – and indeed it’s looking likely that EU legislation will move from 23nm diameter to 10nm to take this into account. Diesel particles are of the order of 100nm. These sizes are still tiny compared to the more familiar PM2.5 and PM10, which refers to micrometre values. PM10 represents the coarser particles around one-tenth the width of a human hair – 10 micrometres is equal to 10,000nm. Even the often referred to “fine particles” of PM2.5 can be up to 2,500nm in size.

Emissions Analytics tells us there has been a sharp increase in potentially dangerous ultrafine particles as a consequence of the widespread adoption of direct injection gasoline engines plus a market swing back to gasoline. This increase in ultrafines has only recently been policed with the introduction of the Real Driving Emissions regulation.

Comparison to tyre wear emissions
While this has been going on, tyres have not been regulated at all for their emissions, and are believed to have become a leading source of non-exhaust emissions and of broad concern whether considered as an airborne source of pollution or as a watershed microplastic. Non-exhaust emissions are believed to constitute today the majority source of primary PM from road transport, 60 per cent of PM2.5 and 73 per cent of PM10 [DEFRA, 2019].

How to explain these figures, which seem inexplicably high?

In Emissions Analytics’ initial tyre testing, it began with a basic mass loss approach, hypothesising that an average tyre might shed an estimated 1.5kgs over a 30,000km life. In respect of the 200-mile (320km) test Emissions Analytics conducted, this equates 16g in mass loss over that distance. Quadrupling the figure to account for four tyres, and dividing by 320 gives a theoretical per km mass loss of 0.2g (200 milligrams), already 22 times more mass loss per kilometre than is permitted in the current exhaust regulation (4.5 mg/km).

Emissions Analytics says that in real-world testing it found that tyre wear can be much, much higher than the starting hypothesis. As Emissions Analytics were originally concerned that the mass loss levels would be too small to measure, it stacked the decks by choosing the cheapest tyres, ballasted the car heavily, chose a track with average surface quality and designed a test cycle with high speeds and much cornering.

Driving a 2011 VW Golf 320kms at high road speeds on the track resulted in a mass loss of 1,844g which equates 5.8g per km. Emissions Analytics tells us that this was 29 times worse than its hypothesis, and partly explained by its deliberate quest for a ‘worst case scenario’. It should be noted that the driving and vehicle payload would be aggressive but legal if conducted on the public highway.

Nevertheless, it is a very high figure: 5,760mg/km of completely unregulated tyre wear emission versus regulated exhaust emission limits of 4.5mg/km – a factor of over 1,000. And while Emissions Analytics sought a worst-case scenario it could have been worse still.

As safety organisations repeatedly note the real ‘real world’ is one in which tyres are routinely underinflated, increasing wear, whereas Emissions Analytics’ tyres were inflated exactly to their correct levels; rough surfaces abound in many countries; speed limits are broken and budget tyres have flooded the market for years.

One objection to this may be that this lost tyre mass is mostly large particles which fall rapidly to the ground, whereas the tailpipe emissions are mostly ultrafines that hang in the air. It is true that most of the tyre mass was at the top end of the measured size range (PM10 or up to 10,000nm), and the tailpipe particles are mostly below 100nm. However, the tyre wear emissions also included a high number of particles down to 10nm, as a result of volatilisation of the tyre material due to heat in the tyres. Therefore, tyres shed material that both leads to microplastics in the watercourse, and ultrafines that compromise air quality.

Future trends
As the UK’s AQEG notes, that while regenerative braking is expected to reduce brake wear emissions, the increased weight and inefficiency of SUVs and battery electric vehicles will likely be associated with increased tyre wear, road wear and resuspension. The AQEG also goes further in speculating that a possible technological mitigation method for reducing tyre emissions would be ‘mandating formulation of low-wear/low-emission tyres, brake pads and road surfaces.’

Emissions Analytics says it will go much further than that. New problems prompt new solutions, some of which are already at hand. There is a world of difference between high quality tyres and low quality tyres, for one thing; and the persistent bias of the industry currently towards aggressively-tyred high performance BEVs is partly an effort to market them to a still sceptical public, a trend that will moderate as BEVs become more accepted and efficiency rises to the surface. Driver style and the extent to which power electronics can moderate torque delivery is another evolving dynamic.

The challenge to the industry and regulators is an almost complete black hole of consumer information undone by frankly out of date regulations still preoccupied with exhaust emissions.

This flies in the face of current trends towards heavy SUV-bodied BEVs sporting traditionally wide, low profile tyres, compared to a much tinier subsection of BEVs in the marketplace that prize efficiency and refinement over looks and ultimate performance.

For now, tyre emissions are a wholly unregulated aspect of motoring, but Emissions Analytics tells us it doubts that this will remain the case. If tyres are shedding even a fraction of 5.8 g/km Emissions Analytics measured, and more than 1,000 times tailpipe emissions, this subject must be taken seriously.