It was interesting to read glowing references from the government and Repak ELT last week about their excellent recycling rates for waste tyres generated in Ireland, writes Padraic Deane. 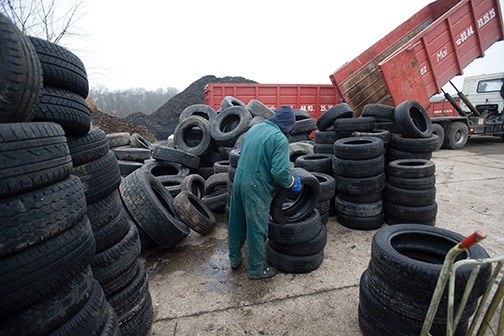 We find this a rather interesting portrayal of what happens waste tyres from Ireland, as we reported last month that 75 per cent of the waste tyres collected under Repak ELT’s own scheme last year actually ended up in India. Surely this is not something that the government and Repak should be congratulating themselves on.

As per our article last month ( see at: http://www.tyretrade.ie/index.php/india-closing-its-doors-to-tyre-waste/24722 ), there were 637 tyre pyrolysis plants in India (where 75 per cent of Irish tyres under the Repak ELT scheme ended up last year).

The growing backlash from environmental groups and residents living near pyrolysis plants, in India will likely see all these operations banned from January when the country’s environmental court rules on this.

A small percentage of more sophisticated recycling operations that are not damaging to workers or the environment may continue under licence.

Our information is that South Korea, Malaysia, Vietnam and Honduras are among other destinations being targeted as replacement destinations for waste tyres from Ireland.

How is the waste tyre industry in Ireland functioning?

The exact figure that the producer pays when tyres enter Ireland is unclear. Perhaps Repak could explain what producers pay when the tyres enter the country and what happens with this money.

We have enquired how much collectors get paid and our research also shows that all the fees paid to collectors are as follows:

Recycling in Ireland; €198 per tonne;

Recycling from Abroad; €178 per tonne;

Recovery from Abroad; €155 per tonne’

Arising from the proposed banning of tyre waste imports by the Indian Government, we’ve looked into the issue, and the so-titled ‘recycling’ abroad subsidy gives rise to several questions.

How does Repak know definitively know that the tyres that left Ireland ended up in reputable “recycling” facilities in India if there are clear and fundamental problems with the waste tyre industry in India?

How can Repak be 100 per cent sure that the waste tyres leaving Ireland ended up in reputable facilities, when most transactions are completed by brokers and generally the collectors don’t know where the tyres go afterwards.

Are the figures based on paperwork provided by a broker or the end waste destination, and does Repak ELT have visibility on this?

The spotlight in India shone on waste tyres and the dangerous forms of tyre reprocessing and eliminated low-grade end of life tyre processing in the Indian sub-continent.

The pyrolysis process employed by many plants there involves high levels of pollution and also adversely affects the health of workers involved in the process.

It’s not usual to have Governments export problem waste but considering the emissions and the cost of sending waste to India that could be recycled in Ireland, which would create employment and income tax, VAT and other revenues for the State, it makes no sense both morally or financially for Ireland.

Why then are we doing this? It is bringing in the money and adding to the millions already resting in Repak’s accounts. I know it’s a ’Not for profit’ organisation, but Repak has over €27 million in itsbank accounts.

This is an organisation that the Irish Government awarded the contract to, a monopoly and without complying with EU tendering process rules. How much has Repak ELT made from the waste tyre scheme since its inception two years ago?

As we pointed out in our article last month and warned on a number of occasions and the Repak report confirms, the Repak ELT scheme seems to be all about reporting and money. The catchline on the report is ‘Going the extra mile’, but at what price? It hardly adds up morally.

One Indian businessman from one of the main areas effected in India says of those that export tyre waste to India: “They clean their own country and dump their garbage on us.”

In a report read by TyreTrade.ie, workers involved in the pyrolysis have no safety equipment, and their skin and clothes were covered in black soot.

Close by residents say they have suffered from breathing difficulties and eye and throat infections since the plants began expanding, and farmers have  found black dust in their soil.

Our enquiries also tell us that many of the waste tyre collectors are not happy with the current state of play regarding waste tyres in Ireland.

Indeed, only in the last two weeks, one of the largest collectors of waste tyres in Ireland announced it is quitting waste tyre collections. Others claim that the lack of viable outlets for waste tyres will force them to quit in the near future.

The whole scheme pays the collector, who has just to buy any reasonably large van or truck, get a straight-forward waste collection permit, get a local authority permit to transfer tyres and buy a cheap baler and they’re in business.

Up to when the recent issues in India came to light, the waste tyre collector got paid by the broker for every container of tyres that they exported.

Now they have to pay heavily but they cannot even get the containers exported in most cases. At present there isn’t sufficient infrastructure in Ireland to deal with all the waste tyres generated in Ireland and we can’t see any improvement in this situation when the reality is that the whole industry is in disarray despite the self-congratulatory press releases.

Repak self-promotes itself as the saviour for waste tyres in Ireland. It allows them to do reporting and transact in millions of euro and outlay a lot less money, building up massive cash reserves.

It is doing nothing to support putting in place proper infrastructure for dealing with waste tyres on the island of Ireland.

All in all, this whole situation is not something to be congratulating ourselves on and the word spin comes to mind.

I invite Repak ELT to exercise their right of reply to any or all matter raised in this article.