The latest range marks a complete renewal of the family that has specialised in the SUV market for more than 35 years, with the range tailor-made for premium models and featuring specialised tyres for different seasons.

The new Scorpion tyre has been developed specifically to cater for the heavier weight, high centre of gravity and unique mechanics and driving dynamics that are the main characteristics of modern SUVs.

These characteristics differentiate SUVs from more traditional car designs and therefore demand high-quality bespoke tyres. Pirelli said the new range of Scorpion tyres respond to this need, transferring many of the technological innovations it recently introduced in the new Cinturato to the SUV world, with specific adaptations and technologies to match the characteristics of these vehicles.

It said the result is a Scorpion tyre range featuring the “most modern technologies available”, with the ability to better adapt themselves to the performance of today’s vehicles: including those with ‘green’ powerplants.

The Scorpion range has the highest number of homologations for electric or plug-in hybrid cars in the entire Pirelli portfolio. These tyres are recognisable through the ‘Elect’ marking on the sidewall.

Among the technologies offered by Pirelli’s newest range of tyres, a number of optional extras are available, including: Pirelli Noise Cancelling System (PNCS), which helps reduce road noise inside the vehicle; and Run Flat and Seal Inside, which help drivers to continue travelling even after a puncture.

The technical characteristics of the upgraded range – with the summer Scorpion, the Scorpion All Season SF2 and the new Scorpion Winter 2 – were presented today by Francesco Sala, Pirelli’s executive vice president for Europe; Aldo Nicotera, the chief commercial officer for Europe; and Paolo Brivio, chief of product development.

Key to the development of the new Scorpion range has been Pirelli’s ‘Eco-Safety’ design approach, which aims to combine a low environmental impact (thanks to decreased rolling resistance, reduced road noise and high mileage) with the best possible performance and safety (shorter braking distances, higher grip, better vehicle stability and decreased risk of aquaplaning) thanks to the innovative materials and cutting-edge modelling used during the development process.

The new Scorpion is also more efficient when it comes to reducing fuel consumption (or battery consumption in the case of electric cars).

The new tyre is also quieter and lasts longer compared to the previous generation: advantages that all contribute to greater sustainability.

Pirelli said these improvements were made thanks to the use of fresh tread compounds with new materials in the structure, as well as the development of innovative tread patterns that allow longer-lasting performance.

Following the Eco-Safety approach, the structure of the tyre has been reinforced to cope with the dynamics and weight of SUVs during emergency manoeuvres, such as sudden direction changes or braking; ensuring greater control. The new Scorpion is also able to cope with significant loads through the tyres, guaranteeing the correct distribution of pressure throughout the footprint to allow a balanced and controllable dynamic response.

According to Pirelli, the entire new Scorpion range aims to achieve more than 400 original equipment homologations, with more than 50 per cent of these for the latest electric vehicles. 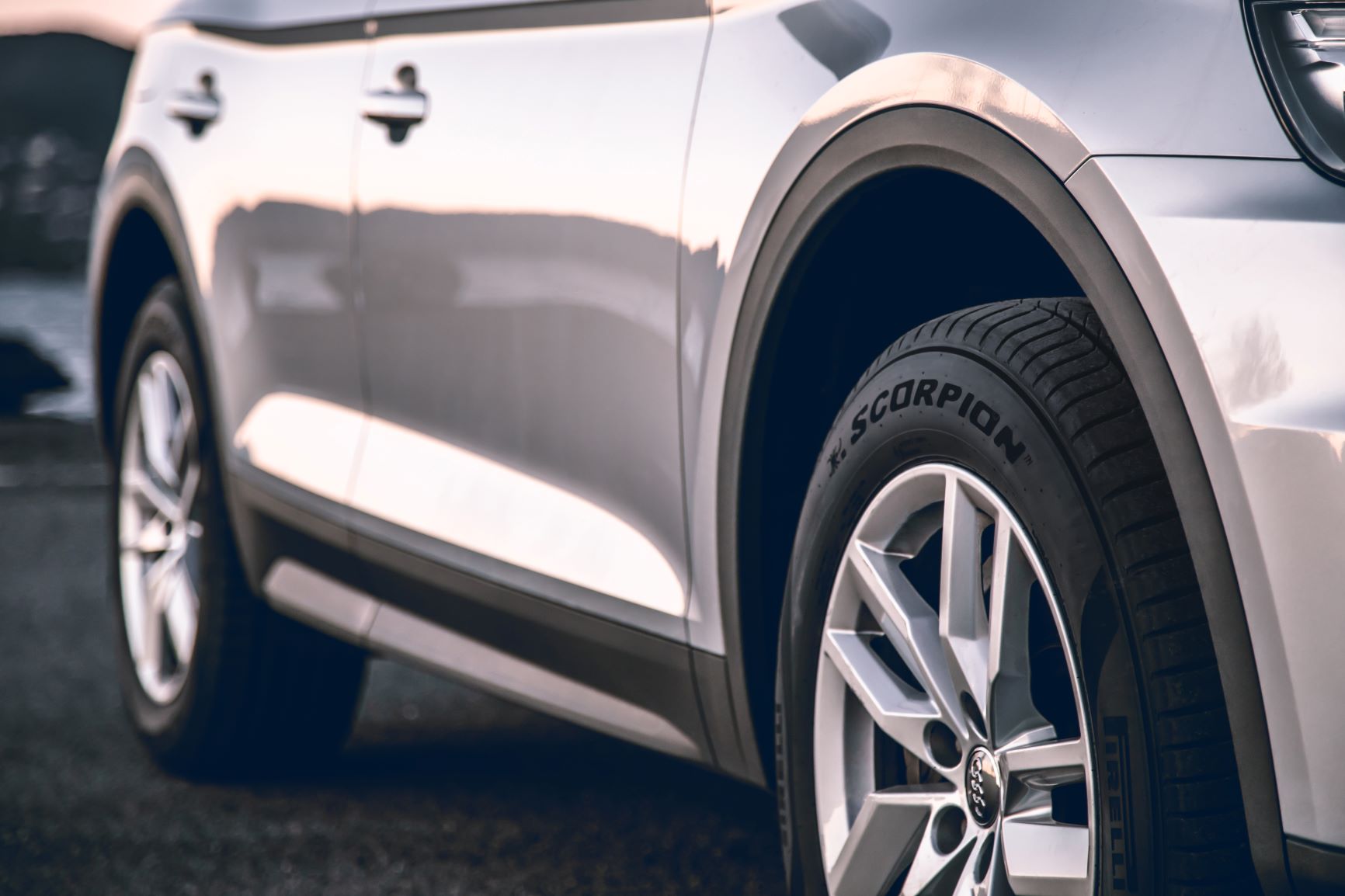 Performance
Pirelli claims the latest tyres in its Scorpion family rank among the very best in the market in all sorts of different driving situations. Tests were carried out by German certification body TÜV SÜD, which has awarded the new tyre its coveted Performance Mark.

Summer tyre
The latest Pirelli Scorpion summer tyre features a new asymmetrical tread pattern which – thanks to the improved stiffness and shape of its longitudinal and lateral grooves – allows better braking both on dry and wet surfaces compared to the previous product.

The more even footprint of the new tyre tread, achieved thanks to the particular curvature of the profile, together with the stiffness of the tread and compound, ensure reduced rolling resistance and decreased fuel or battery consumption. All the different sizes of Scorpion are in the A or B classes of the European tyre label when it comes to rolling resistance.

Safety was also central to the design of the new Scorpion. Thanks to the stiffness of the tread, as well as the innovative design of the blocks and compound, braking on dry and wet surfaces has been improved by seven per cent compared to the previous Scorpion Verde, Pirelli said.

When it comes to wet braking, all Scorpion tyres score either A or B on the European tyre label.

Pirelli boasts that the compound of its new Scorpion contains new-generation synthetic rubber capable of providing a perfect blend of characteristics: low rolling resistance, excellent braking performance in the wet, and uniform tread wear throughout the life of the product.

The compound of the new Scorpion originates from the technical know-how already applied to the new Cinturato P7 but stiffened to cope with the particular demands of SUVs.

The compound is enriched with silica, specific resins that increase grip, and bespoke polymers: innovative elastomeric materials that improve the interaction with the silica itself. These polymeric materials are able to alter themselves depending on operating temperatures.

As a result, this new compound has a form of ‘mechanical intelligence’ (thanks to a better distribution of the silica particles and improved interaction between them) which means that it can vary its behaviour according to driving conditions and temperatures, giving the driver a very wide operating window.

The innovative Scorpion compound was developed using a Pirelli-patented process derived from motorsport, maximising the uniformity of the compound components and enhancing the performance of the tyre for longer on different road surfaces; especially in the wet when driving conditions become critical.

This new summer tyre is now available in Europe in 26 sizes, from 18 to 21 inches, with more than 48 homologations already, of which over 75 per cent are for EV.

The new Scorpion is also very quiet, emitting up to three decibels less than the previous-generation tyre, according to the European tyre label. This means that the latest Scorpion tyre also comes with significant environmental benefits. 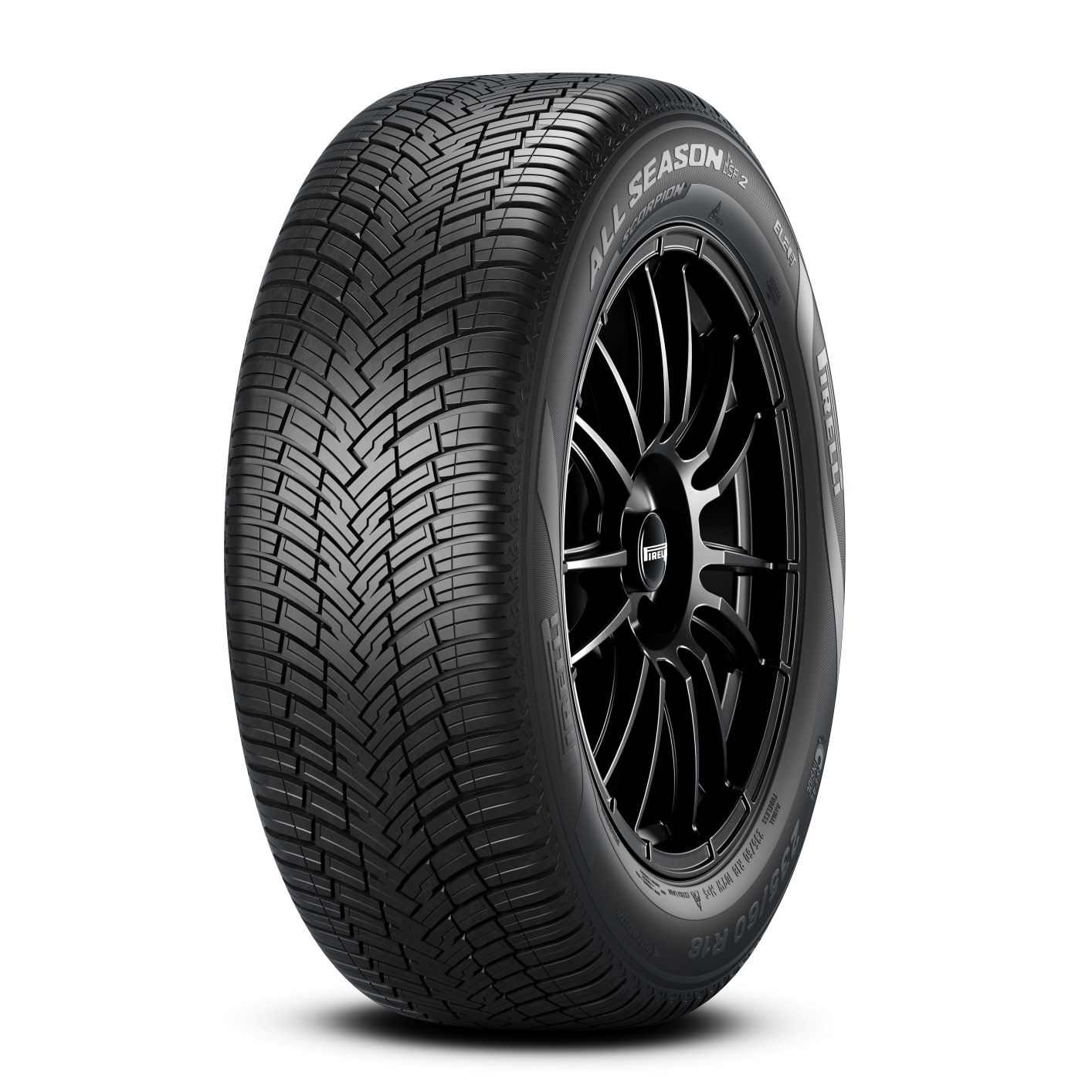 All-season
The new Scorpion All Season SF2 is available in 33 sizes between 17 and 21 inches in this launch phase. On the shoulder, the M+S symbols accompanied by the 3PMSF (Three Peak Mountain Snowflake) marking certifies excellent performance even in winter conditions.

Tyres with this 3PMSF marking are covered by European legislation as a guarantee of compliance with winter tyre traffic regulations.

Pirelli said the Scorpion All Season SF2 features a compound and a tread pattern inspired by that of the Cinturato, with some unique peculiarities to cater for the specific characteristics of SUVs.

The directional tread pattern of the Scorpion All Season SF2 is characterised by prominent V-shaped grooves that retain snow (improving vehicle control on snowy surfaces) while draining water from the footprint when driving on wet roads and helping to prevent sudden aquaplaning.

When driving in winter and low temperatures, the sipes in tread pattern remain open to facilitate better braking on snow, while when braking on dry or wet surfaces they close up, increasing the stiffness of the blocks, to generate greater grip.

This adaptive behaviour is down to the 3D sipe technology, meaning that a winter tread pattern can automatically turn itself into a summer pattern, allowing better control of the vehicle in all dry and wet conditions.

The design of the lateral grooves, combined with a continuous central groove, guarantees the efficient expulsion of water when it rains, improving safety and aquaplaning performance.

To cope with the driving dynamics and weight of SUVs, there are reinforced blocks in the tread (in a larger size compared to the Cinturato All Season SF2). The geometry of the tread pattern is also laid out so that these blocks reduce road noise.

Pirelli claims the tread compound of the Scorpion All Season SF2 is dual purpose: soft and adaptable for cold and wet conditions but rigid and stable for dry conditions. This happens thanks to the innovative components of the compound itself, which includes polymeric materials bonded to the silica particles.

All the different sizes of Scorpion All Season SF2 (with the exception of those using run flat technology) are in the A or B classes of the European label for rolling resistance: an improvement over the previous product.

The compound also has a wider temperature operating window than the previous Scorpion, thanks to a more rigid compound. This means reduced tread wear and better performance from the tyre throughout its life, as well as a higher mileage: all of which is good news for the environment.

Winter tyre
Pirelli’s new winter tyre for SUVs focuses on safety in all types of seasonal conditions: from snowy to wet surfaces as well as slippery surfaces and dry roads at low temperatures.

The innovations pioneered by the new Cinturato winter tyre are carried through into the world of SUVs, with a tread that features ‘extendable’ variable geometry sipes. Thanks to the 3D structure, these sipes change shape according to the state of wear of the tread, going from a linear shape to a sinusoidal (zig zag) pattern, which increases their surface area and effectiveness.

This technology allows the Scorpion Winter 2 to perform on snow, wet or dry surfaces even when worn. There are roughly 51 metres of sipes that deliver greater grip on snow: an increase of 20 per cent of useful area in compared to the previous Scorpion Winter, according to the Italian tyre maker.

The tread blocks are also reinforced and larger than those on the Cinturato, to meet all the demands of modern SUVs and deliver greater grip, which leads to excellent braking and driving performance both on snow and wet surfaces.

The compound of the Scorpion Winter 2 was developed through the use of an innovative system of liquid polymers, capable of increasing performance on rain and snow compared to the previous product.

This works in combination with another Pirelli-patented process derived from the company’s motorsport experience, which maximises the uniformity of all the compound elements: enhancing the performance of the tyre for longer on snowy and wet surfaces, and lengthening tyre life.