A new Guinness World Record for the fastest time to push a car one mile (1.6 km) has been set in Finland.

The record was set by Jussi Kallioniemi, who says that this is not a test of brute force but rather an enormous puzzle. A key piece of this puzzle was the Nokian Hakkapeliitta R3 SUV winter tyre and its light rolling resistance.

It took the 47-year-old Finn 13 minutes and 26 seconds to push a 2,100kg passenger car for one mile. He beat the previous record by nearly two minutes. 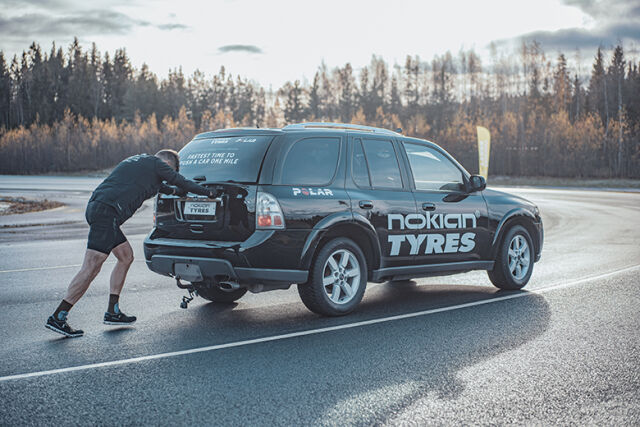 The record was set at the Nokian Tyres test track in southern Finland. For the record attempt, Kallioniemi used his own car, a 2006 Saab. Technical customer service manager Matti Morri from Nokian Tyres was in the driver’s seat.

Kallioniemi praised the low rolling resistance of the Nokian Hakkapeliitta R3 SUV winter tyre, as this is an important factor in pushing a car.

“Provided that the tyre pressures are in check, using tyres with low rolling resistance can save up to 0.5 litres of fuel per 100 km or substantially extend an electric vehicle’s range even in the winter.

“At the same time, you are conserving the environment due to the lower CO2 emissions.”