With Car drivers demanding safety not only on dry roads, but particularly in wet conditions the new Uniroyal RainExpert 3 opens a new chapter for the inventor of the rain tyre, ensuring the highest possible wet-weather performance. 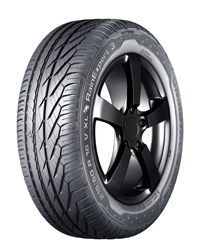 This smooth-running rain tyre for cars from compact to upper mid-range models and SUVs is available for 13- to 18-inch rims, with aspect ratios of between 80 and 60 percent, and in widths of between 135 and 265 millimeters. Uniroyal has opted for an asymmetrical tread pattern that ensures rapid water dispersion when driving in the rain, whilst also delivering safe handling on dry roads.

Just like its sporty relative, the RainSport 3, the rain tyre developers have opted for Shark Skin Technology with the RainExpert 3, ensuring faster displacement of water from under the contact patch. The skin of a shark is known for its ability to considerably reduce flow resistance. For the RainExpert 3, a structure based on the placoid scales of a shark’s skin has been incorporated in the grooves of the tyre. Shark skin technology (SST) reduces flow resistance and accelerates water drainage from the tyre’s contact surface.

This is accompanied by a flow-optimised tread structure and a tread compound developed for strong wet grip. In both braking and handling in the wet, the new RainExpert 3 delivers a four percent improvement over its predecessor, while recording a five percent improvement in rolling resistance and in even wear.