HomeBrandsFalkenMixed fortunes for Falken at the ADAC Total 24h Race

The 47th edition of the ADAC Total 24h Race at the Nurburgring posed enormous challenges for Falken Motorsports. In the early hours of the Saturday evening, debris on the track damaged the rear right tyre of the #44 Porsche 911 GT3 R, robbing it of any chance of a podium position. The #33 BMW M6 GT3, by contrast, enjoyed a solid race and finished in sixth place as the best BMW. 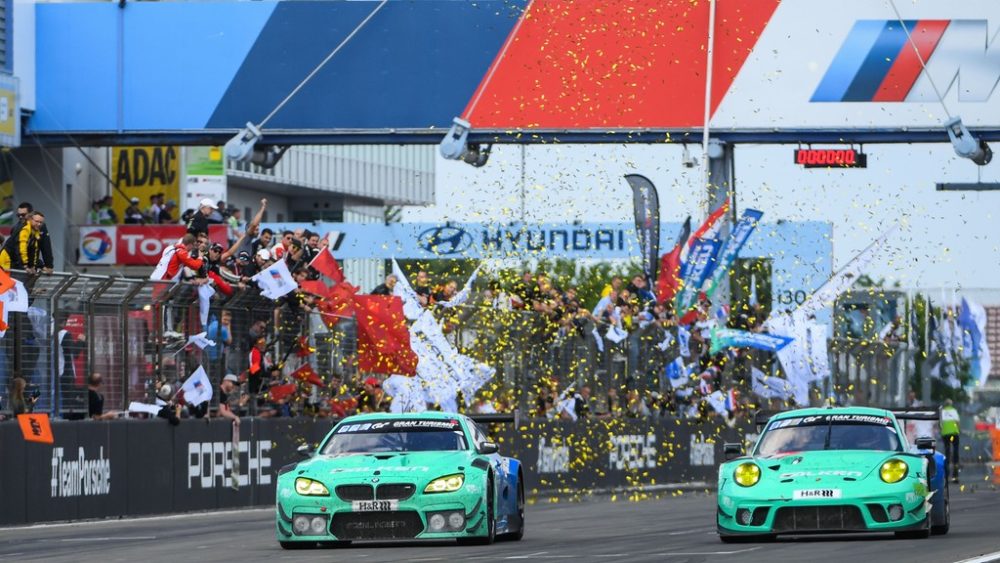 The race began without any incidents for either Falken entry. But five hours in, a puncture – almost certainly caused by debris on the track – necessitated an extended repair break, knocking the 911 back from tenth to sixtieth position. As the race continued, the Porsche quartet amazed onlookers with a methodical race to catch up, elbowing their way back to the Top 15. Unfortunately, a spin shortly before the end of the race called for another unscheduled pit stop, resulting ultimately in a 21st finishing position.

The BMW M6 GT3 ploughed its way consistently through the field, quickly assuming the role of BMW spearhead. Here too, the experienced Falken drivers demonstrated their immense skills, bringing the 500 hp GT3 car safely through a night characterised by numerous incidents and caution zones, and demanding the very last reserves from drivers and team alike. Once again, the Falken tyres proved to be the key to success, enabling fast and constant lap times.

At the end of the 24-hour race and after a Total of 3,934 kilometres, the BMW M6 GT3 passed the well-earned chequered flag in sixth position.

The Falken race team will now be taking a summer break. The next race will be the fifth round of the VLN Endurance Championship, the 6 Hour ADAC Ruhr Cup Race at the Nurburgring on August 3.