A Dorset-based agricultural contractor has finally replaced a set of Michelin XeoBib tyres after almost 9,000 hours in service. 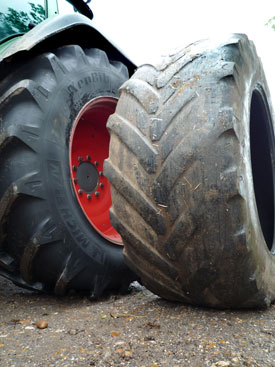 “We have never had any tyres perform half as well as these XeoBibs,” said Pro-Ag Director Mike Simpson. “When we bought the tractor, we thought perhaps such a wide profile tyre might have been over-the-top, but it has proved an incredible investment because it’s given such good service.”

A former Farmers Weekly Contractor of the Year winner, Simpson’s company has been in business for a quarter of a century and specifies Michelin agricultural tyres as original equipment across the majority of its fleet. Pro-Ag specialises in services to livestock farmers such as baling, forage harvesting, muck spreading, slurry pumping, and maize or grass drilling, with occasional heavy cultivation. Simpson points out that for three years running the Fendt was used to direct drill 3,000 acres (per year) of cereals and oil seed rape, tackling the flinty ground of Dorset and Wiltshire with ease.

“The XeoBibs have been able to handle the tough combination of high levels of road use, high loading and low pressure,” Simpson says. “It’s not just the tread wear but the sidewall strength that has been excellent. We’ve had tyres from other manufacturers where the sidewalls have failed before the tread has worn out.”

“We’re able to improve productivity levels with these tyres,” Simpson says. “For example if we are slurry injecting and a farmer goes out and sees we are doing no damage to his soil, he’ll say ‘carry on’. But if he sees deep ruts in the soil, he’ll say ‘come back another day’.”

The Fendt 820 tractor has been Pro-Ag’s main baling tractor, moving across stubble fields at speeds of up to 20km/h. Simpson has seen minimal slippage and good fuel economy since fitting the tyres and made the decision to re-fit new XeoBibs on the Fendt in October, rather than trade it in for a new model.