Michelin has launched the 385/65 R 22.5 size version of its X Multi T trailer tyre across Europe. The launch follows its global preview at the CV show in April. It replaces the XTE3, four million of which were sold in Europe since its launch in 2007. 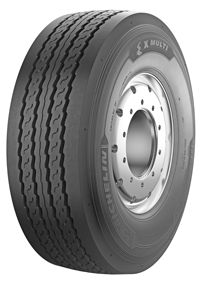 ‘The addition of Carbion is a testament to the more than €600 million Michelin spends on R&D annually’ the company says.
Given that trailer tyres are responsible for almost half of the braking performance on a fully-loaded articulated vehicle, its tread pattern is designed for effective water dispersal and even wear.

Its groove design and longer ridges contribute to it being marked M+S (mud and snow), indicating its suitability for winter conditions. It also achieves a ‘B’ label rating for wet grip and rolling resistance, plus an external noise measurement of just 69dB.