County Derry-born Marty McCormack is enjoying a notably strong season in the Prestone MSA British Rally Championship and, with a typically skilful showing and trouble-free run in the last remaining round, could well achieve a well-deserved podium finish in this hard-fought series.

His season in the Kumho-shod Skoda Fabia R5 began with a DNF due to suspension problems on the Border Counties event. He and trusty co-driver David Moynihan then put themselves firmly in the hunt for championship honours with a 3rd place in both the Pirelli International and Scottish rallies. A heavy accident left them without points from the Ypres Rally and, more seriously, without their usual mount while it was being fully rebuilt by McGeehan Motorsport. Under the circumstances 4th place on the ensuing Nicky Grist event aboard a borrowed Ford Fiesta R5 was a rewarding result. 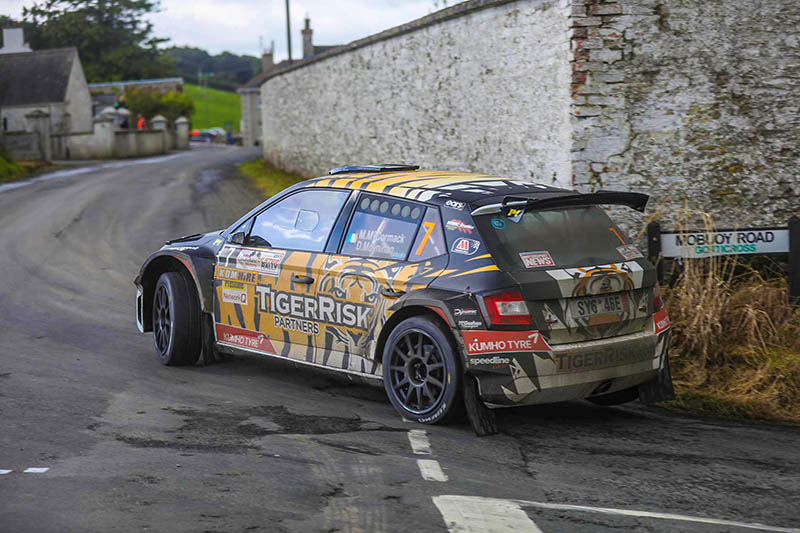 In preparation for the recent Ulster Rally, McCormack shook-down the rejuvenated Fabia by contesting the non-championship Tyrone Stages Rally, in which he finished an encouraging 2nd overall. As is so often the case in Irish tarmac rallies, the grip levels on the Ulster one were unpredictable throughout but, following a big spin on stage 8, Marty continued to grow in confidence and claimed the fastest time of all on the penultimate stage to finish in 4th place. This left him 4th overall in the championship standings, just nine points behind Fiesta R5 driver Osian Pryce. With further points available on both days of the final round on the Isle of Man (September 14-16), McCormack still has everything to play for.

Commented Kumho Motorsport’s Steve Thompson: “Both Marty and the Skoda are clearly on song right now, and it only needs a little bit of luck to see him end the year in the style we have come to expect of this seasoned competitor.”

For further information on Kumho and its products for motorsport and road use, see www.kumhotyre.co.uk.