Kumho has launched the all-season Solus HA32, which claims 15 per cent greater wet grip and 10 per cent better wet/dry handling and braking compared to its predecessor, the HA31. 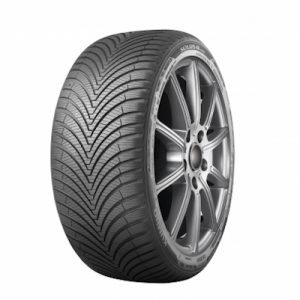 New cars sold on the Irish and UK market generally come equipped with summer specification tyres which, however good they may be in the milder seasons, means their performance is likely to tail off markedly below 7°C – a figure several degrees higher than the average temperature for December, January and February. To counter this, an increasing number of drivers now have sets of both summer and winter tyres, the downsides of which are the doubling in expenditure (more if you also opt for a second set of wheels) and the need to swap the tyres around twice every year. The perfect compromise is an all-season product designed to operate in all conditions all the year round.

Such is the respect in which HA32 is already held that it had secured one of the world’s top three design accolades (The Red Dot Design Award) even before its release onto the European market. The tyre’s cutting-edge compound and zigzag V-shaped tread pattern are primarily responsible for the notable improvements in wet weather performance, which have earned it an enviable grade B label for wet grip. Other features such as its three-dimensional interlocking sipes ensure impressive handling in all conditions – not least those involving snow, ice or slush.

The newcomer is initially available in 42 sizes to fit wheel rims from 14 to 18 inches in diameter, which will satisfy the needs of a wide spectrum of passenger cars, as well as many of the SUVs now so popular in the Irish and UK market. As befits such a stand-out product, the HA32’s sidewall features a distinctive all-season icon inclusive of an eye-catching hologram that changes appearance according to the angle of the prevailing light. More fundamentally it also wears the ‘M+S’ and ‘3 peak mountain snowflake’ symbols that confirm the product’s winter weather credentials.