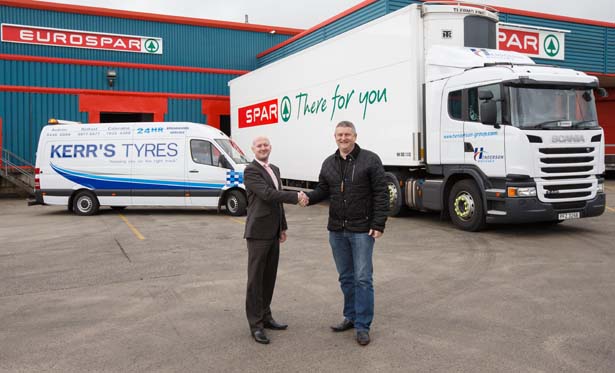 PPK tyre contracts can bring many benefits to the Haulage industry and in particular those servicing a retail chain where managing costs and margins is paramount to a store’s profitability. PPK contracts offer peace of mind that there will be no unexpected spikes in tyre costs across the term of the contract, which is a huge benefit for a haulier running a fleet.

“At Henderson Group we are very pleased to have awarded this contract to Kerr’s Tyres,” said Greg Gilmour, Transport Manager, Henderson Wholesale, “The Pence Per Kilometre package has worked very well to date and allows us to plan ahead safe in the knowledge that we know what our tyre costs will be in advance.”

The real benefit of PPK contracts for a distributor supplying retail chains is that they can be sure of their costs over the duration of the contract. Customers, such as Henderson Group, can carry on with the day to day running of their business safe in the knowledge there will be no surprise spikes in costs, breakdowns or inefficiencies to worry about.

“At Kerr’s Tyres we pride ourselves on getting to know our customers exact requirements. No two customers are the same so we see it as our job to tailor the right package to suit them”, said Norman Kerr from Kerr’s Tyres, “Having worked with Henderson Group in the past we are delighted they have chosen to award us with this prestigious PPK contract.”