Steve “Baggsy” Biagioni and his new Nissan S13 participated on the Lydden Hill Race Circuit stand throughout the four days, helping raise the profile of one of the country’s leading drifting venues. 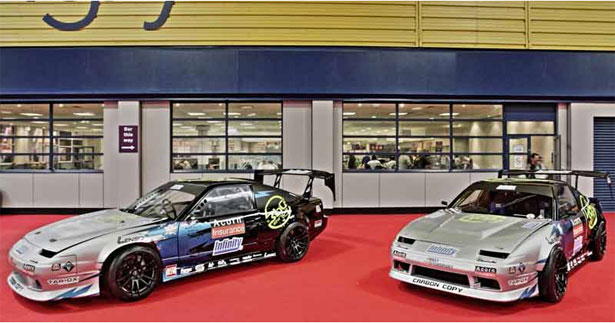 Across in Hall 9, Mark Lappage and Ian Waddington were displaying the fresh S13’s in the new 2014 livery graphics and were delighted with the positive feedback received from visitors.

The cars were showing off ‘new shoes’ for 2014 – brand new sets of Infinity Ecomax tyres which are just raring to go!

Mr. Nigel Hampson, Head of Business Development for Infinity Tyres, commented: “We were very pleased to have all three new A.I.M. cars on display. The team has worked extremely hard in the off-season to prepare the new set-ups and with the new Infinity Ecomax tyre fitments, we expect the team to challenge for honours in 2014. It’s also a delight to show our support for the sport of drifting which continues to go from strength to strength in the eyes of the enthusiastic British public”.