Industrial Tyre Specialists, which this year celebrated its 40th year in business, has reflected on what has been a very busy 2021 for the company.

Working out of its three warehouses in Ballymount, Co Dublin, the company says it has been through huge internal structural changes since the beginning of the year, culminating in the internal promotion of three long term staff members to the forefront of the business.

This, it says, has allowed working company owners Kieran and Alan Clancy to concentrate on its dedicated sales area along with new projects and market opportunities in specialty tyres.

Damien Kinsella, who has been with Industrial Tyre Specialists for over 14 years, is promoted from office manager to general manager.

Alan Clancy said of the appointment: “Damien has been an integral part of our company since joining way back in 1997 and has worked his way to where he is today through hard work, diligence, knowing his stuff, looking after customers, and having a great all-round sense of fairness, which we have found to be key in his senior roles.”

Commenting on his promotion, Kinsella said: “I feel honoured and proud to be at the forefront of the company. I’ve watched it grow year on year and I am excited to be an active part in the future growth. We have a great team working with us and pride ourselves on excellent customer service.” 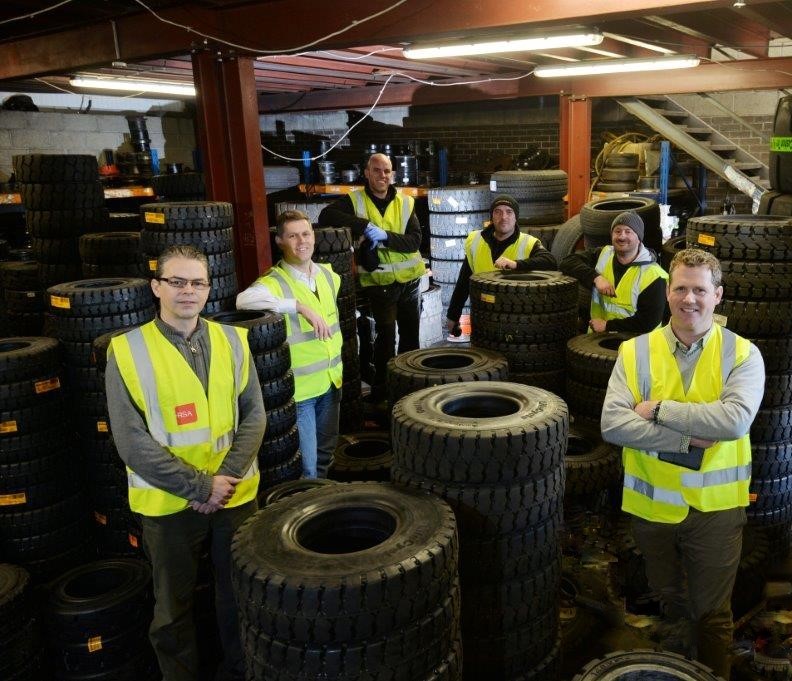 The second promotion within Industrial Tyre Specialists this year is David Jewell, who has been promoted from warehouse manager to office manager.

Jewell joined the company in late 2001 and according to Alan, “has worked hard all these years to help make us the number one for solid tyres in Ireland”.

“David has all the key skills required to fulfil his new role in the sales office,” Alan added. “From advising of wheel availability, arranging replacement tyres for fleet customers and technical questions about tyre quality.

“Someone with 20 years’ fitting experience, along with the skills and the knowledge of David is hard come by today.”

Jewell said of his new role: “I have been with the company for more than two decades, moving into a more responsible position within Industrial Tyre Specialists.

The final promotion of 2021 from Industrial Tyre Specialists is David Murtagh, who takes up the role of warehouse manager having previously been head fitter/mobile press.

Alan added: “David Murtagh joined the business in 2010 and since that day has fitted in like one of the family.

“David is highly knowledgeable about the solid tyre industry and how it works, and we have found him to be reliable, calm, and dependable as well as honest and helpful.

“He now looks after the upkeep of our three warehouses in Ballymount Drive and overseas all mobile work to ensure all mobile fitters understand what’s required and when.”

Meanwhile, Alan Clancy told TyreTrade.ie of how finding replacement staff for the company’s promotions was “tougher than first expected”, but with the most recent additions to the team, “Industrial Tyre Specialists now feels like is it ready for any job thanks to its dedicated team of highly trained and qualified staff”.

Alan said: “In 2020 we prepared for move of staff by hiring Matthew Farrell and Ian McDonnell, and this year we welcomed Noel Farrell to the company to complete the staffing gap. This brings us to our strongest position yet for the customer service we are known for.”

Also operating behind the scenes is fellow Industrial Tyre Specialists owner, Noel Clancy, who is the company’s finance director, overseeing all things financial.

Both Alan Clancy and Kieran Clancy, who previously manned the phones and arranged the day-to-day jobs are now freed up, allowing them to “concentrate on other aspect of the company” which required their “focus and attention”, according to Alan.

Naturally, sales is a hugely important aspect of Industrial Tyre Specialists’ business, which is where Kieran and Alan now focus a lot of their attention.

Alan now expects 2022 to be the “best year the company has seen”.

“We have some new tyre lines arriving in, as well as a lot of new material handling products being introduced by our three main suppliers: Camso, Continental and Trelleborg,” he said.

When it comes to managing increased costs, Alan said keeping up with manufacturer increases throughout 2021 was “tough”.

“We can understand most (of these increases) as we ourselves have seen costs for 20ft containers jump from $1,200 in January to $12,000 in May with no sign of them dropping any time soon, meaning a huge increase on landed costs of product for everyone, no matter the market,” he said.

Alan added that Industrial Tyre Specialists has absorbed “some” of increased costs to “reduce impact on end user pricing across the board”.

“By buying in bulk (20ft boxes), we can take advantage of saving further money associated with local purchases (UK and mainland Europe), which we can then pass on to our customers,” he said.

Throughout the pandemic, Alan said the company “continually worked closer with all our three main suppliers during Covid times to ensure supply is not hampered”.

He added that the business has successfully held off any shortfalls by way of bulk orders or direct box orders from respective factories.

With three warehouses now near-fully stocked, four fully operations depot presses and two fully working mobile press fitting stations, Alan boasted that “it would be hard to find a service provider or a stock of industrial tyres like ours on the island of Ireland”.

He concluded: “In 2021 we celebrated our 40th year in business and I would like to take this opportunity to thank all in the tyre trade and material handling trade for their support throughout these wonderfully colourful 40 years.”