HomeIrish NewsHow to improve the safety of goods vehicles in the EU?

Since the last European Transport Safety Council (ETSC) PIN report looking at the safety of goods and passenger transport was published in 2013, the transport sector has continued to evolve. 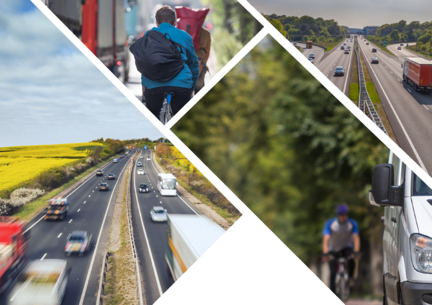 Just-in-time delivery in many industries; next-day delivery of single items from online shops; clothes bought, tried on and then returned; supermarket home delivery – in the background of all these services is an international network of transport that ends with goods vehicles crisscrossing countries, cities and towns.
This report looks at the toll transport of goods and services has taken in terms of road deaths over the period 2010 to 2018. It examines the performance of individual countries, as well as the European Union as a whole, in tackling the risks, and describes some of the policies needed to reduce deaths and serious injuries in the future. 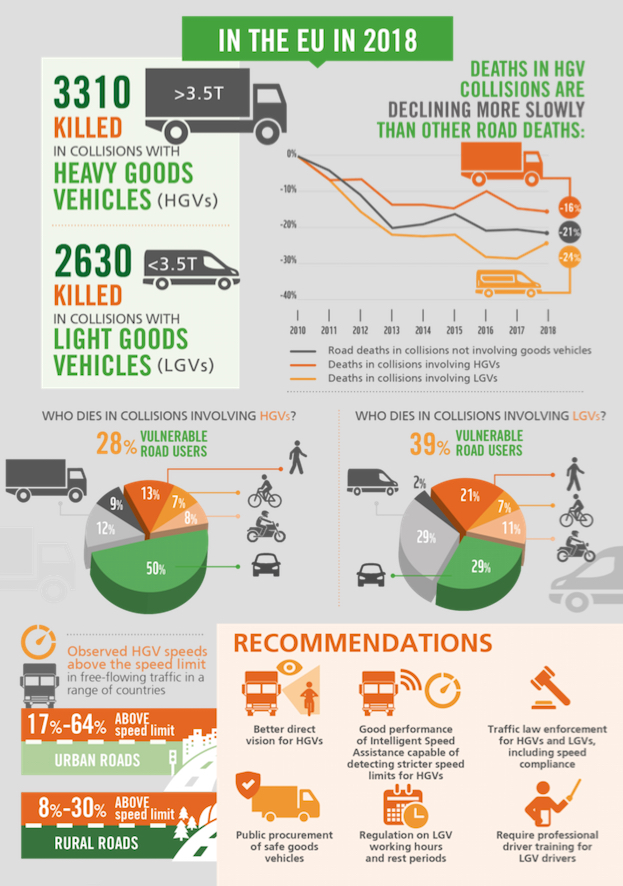 Part I looks at the data on road deaths involving heavy goods vehicles (HGVs) and examines the crucial issue of speed. Part II covers the road death data for light goods vehicles (LGVs). It was not possible to look at LGV speed data because most countries do not separate them from the data for cars.Unfortunately we were also not able to cover serious injury data for either HGV or LGV collisions – in this case because we are advised by the European Commission that the data are not available in enough detail and quality in enough countries. 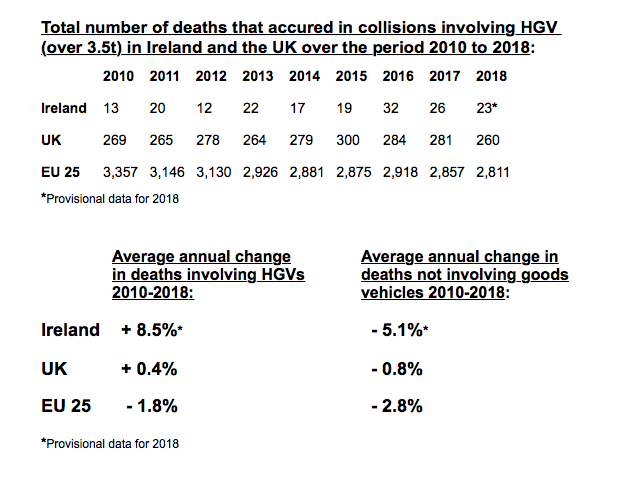 In Part III we look at several key policies for tackling the main risks of goods vehicle transport including vehicle safety improvements and regulations on driving and resting hours and driver training. This section also covers distraction, fatigue, seatbelts and driving under the influence of alcohol and/or drugs. We look at current legislation, particularly at EU level, as well as the work-in-progress on some upcoming changes. Although we focus on EU action, examples of national and city-level action are included as always.At the heart of this report, as ever, are a set of disturbing figures that require urgent action. Thousands of people are still dying in collisions involving goods vehicles in the EU every year: many goods vehicle drivers, but even more car occupants and vulnerable road users. The solutions to preventing many road deaths associated with goods vehicles are available off the shelf and have been for years. There are some great examples of cities and countries taking bold action across Europe, but collectively we can and must do better.
Link to the full report is Here ( https://etsc.eu/wp-content/uploads/PIN-FLASH39_FINAL.pdf )