The 2018 ADAC Northern Europe Cup , one of Europe’s premium lightweight motorcycle racing championships, will feature seven races and a new exclusive tyre partner for its third season.
Dunlop has been chosen as the sole supplier of tyres to the ADAC Northern Europe Cup. This ensures  the same level of tyre for competitors as the Dorna Sports SL European Talent Cup, which was launched in 2017, where the two world championship classes, Moto3 and Moto2, race  exclusively on tyres from Dunlop. 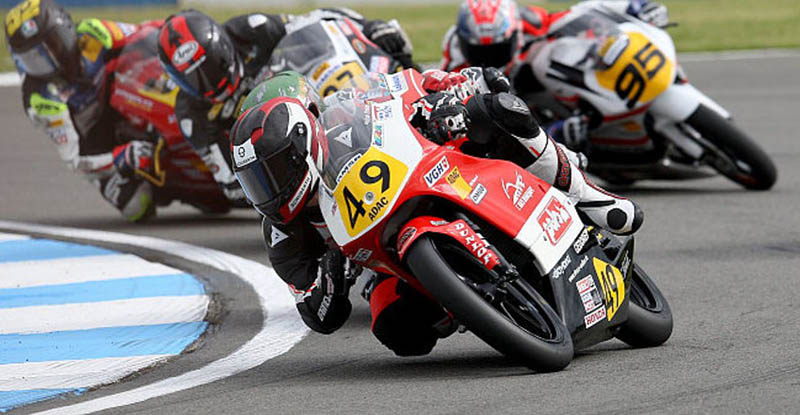 Competitors will see tangible benefits thanks to the new Dunlop partnership, as the first three riders in every race will win a set of Dunlop tyres and the company’s support has also made possible a 300-euro reduction in the registration fee.

“We are proud to support the ADAC Northern Europe Cup. Our Dunlop Moto3 tyres have been chosen by the World’s leading lightweight championships, including the FIM World Championship, European Talent Cup , Red Bull Rookies and Asia Talent Cup.  The opportunity for ADAC Northern Europe Cup riders to race on the same tyres as these series will help them as they climb the ladder to MotoGP” said Wim Van Achter, Motorcycle Motorsport Sales Manager, Dunlop Europe.

Seven top-class meetings feature in the exciting calendar. The 2018 season will kick off with a three-day practice session at Misano (24th -26th March). The first race will take place on the weekend of 11th – 13th May 2018 at the Scandianavian Raceway in Anderstorp, Sweden. With the help of the Swedish organiser and SVEMO, the Swedish Motorcycle Association, all participants will receive subsidised travel to Sweden.

For the second meeting, riders will head to the Motorsport Arena Oschersleben where Speedweek, the German round of the World Endurance Championship, is traditionally held (8th – 10th June).
Fans will have plenty to look forward to in June/July when ADAC NEC riders line up for the first time with MotoGP competitors at the Dutch circuit in Assen (29th June – 1st July), before joining the world’s fastest motorcyclists at the Sachsenring for the German Grand Prix (13th – 15th July).

After a short summer break, the ADAC Northern Europe Cup aces will join the MotoGP stars once more for a trip to Brno in the Czech Republic and the fifth race meeting of the season (3rd – 5th August). ADAC NEC riders will then stage another top-class meeting alongside their British Moto3 counterparts at the MCE British Superbike Championship (BSB) in Silverstone, England (7th – 9th September). The season will close at Assen in the Netherlands, again in the company of BSB riders (28th – 30th September).