HomeBrandsDavantiDavanti racing ahead in Portugal

Davanti is partnering with the Autodromo Internacional do Algarve Racing School in Portugal.

For the next two years all vehicles at the AIA Racing School, which include a Porsche Cayman S, Audi RS3, Audi TTS, Honda Civic Type-R and two Ginettas, will all be fitted with Davanti Tyres. All professional racing tuition, track experiences, and demonstrations will be performed on Davanti’s DX640 tyres, with the exception of the Ginettas which will race on the DX390. 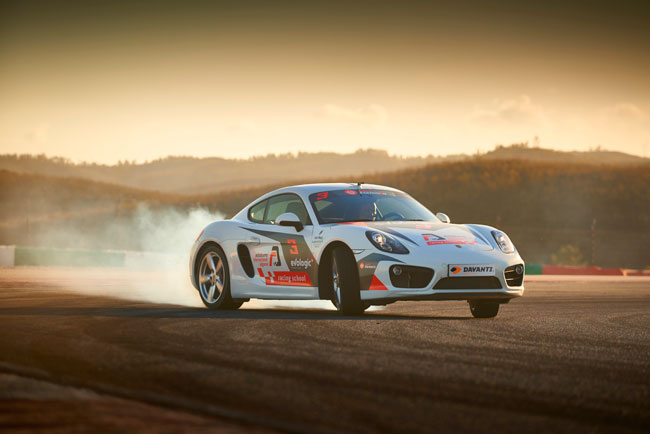 Sean Maddocks, Sales Director to the UK and Ireland says: “The trip could not have been better.
Guests not only had a chance to push our tyres through their paces which showcased the quality of Davanti’s high performance range but they also had a chance to relax on the Algarve coast.”

Davanti made a great impression on the Autodromo team as well. Consisting of their own professional racing instructors headed by former World Superbike and Moto GP rider Miguel Praia and an illustrious cast of racing drivers from all over Portugal that were drafted for the event.
Miguel says: “The Davanti tyres performed exceptionally not only in all the smaller tests but also on the track which is notoriously difficult for tyres. Their grip and predictability are exactly what you want out of a performance tyre and they’re long lasting as well. We even kept the tyres fitted to our cars after the Davanti event and got nearly two months worth of track use out of them.”

As well as the tyre fitments, Davanti will have plenty of brand presence at the track to promote the partnership including a giant feature wall in the Race School, product display areas and branding on the circuits clothing and race helmets.

Sean says “We feel the partnership with the circuit perfectly highlights our message that premium performance no longer has to carry a premium price tag. Whilst the average driver in the UK will never need to test our tyres to the limits they are pushed to on the track, it is a true statement of quality that our range is trusted by professional racing drivers to showcase their track and their vehicles.”

With a race track that is now so prominent in the minds of the motoring enthusiasts all over the world thanks to the Grand Tour, Davanti will be heavily promoting the partnership throughout 2017 and will be working on ways to activate this partnership to the UK and European audience.

To promote the partnership to the UK audience, the team will be exhibiting one of the circuits vehicles on their motorsport themed stand at the 2017 Autosport show in Birmingham in January.
This won’t be the only car on the stand, so look out for another imminent announcement which will highlight the exceptional performance of Davanti Tyres!