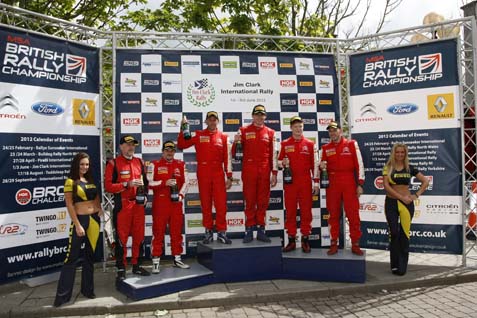 Set in the border counties of Roxburghshire and Berwickshire, the fourth round of the Pirelli-supported British Rally Championship challenged crews as the first all-asphalt round of the six-round series. Competitors utilised a mixture of 15-inch to 17-inch RX7 and RE7 and the new ultra competitive RX5 for the first time this year to cover 15 competitive stages totaling 150 miles.

Finland’s Jarkko Nikara set the pace on Friday evening by claiming two fastest stage times round the repeated 1.2-mile super special stage in the county town of Duns. The second day of competition, however, saw Nikara retire on Stage 9 following a problem with his car’s gearbox.

Six out of eight stage wins on Saturday helped Cronin edge ahead to finish the second day 59.9 seconds ahead of Tom Cave. Jonathan Greer was lying third, over two minutes behind rally leader Cronin.

Two further stage wins consolidated Cronin’s victory at the end of day three, with the Irishman reaching the finish over one minute ahead of Cave. Greer secured third place, with former Pirelli Star Driver Elfyn Evans finishing fourth. Despite never having driven his Skoda Fabia R2 competitively on asphalt, this year’s Pirelli Star Driver Jukka Korhonen impressed on the slippery sealed surface after finishing seventh overall and second in class.

“This was my first time driving on asphalt and I am very happy with my result,” said Korhonen who has now moved up to eighth in the overall standings. “To improve my overall championship position and to pull clear in second place in the R2 class means we have done a good job this weekend. Hopefully we can enjoy another battle on the next event with more success for both Pirelli and the TEG Sport team.”

After his sterling performance at the wheel of a Ford Fiesta R2, 21-year-old Matthew Cathcart was presented with the coveted Pirelli yellow jersey and a nomination towards the end of season Pirelli Star Driver shoot out.

A podium clean sweep for Citroen this weekend has consolidated the French marque’s position at the top of the manufacturers’ standings with 147 points. Renault hold second with 119 points, with Ford only one point behind in third. In the drivers’ standings, Evans and Cave share the top spot with 60 points apiece. After Cronin’s second consecutive victory, the Irishman has been catapulted into third with 58 points.