Cooper competitors in the 2013 Dakar Rally were celebrating at the weekend weekend as Xavi Foj took his second consecutive T2 class title, while the Race2Recovery team secured its place in the history books by completing the world’s toughest rally.

Foj, who used Cooper Discoverer S/T MAXX tyres on his production-based Toyota Land Cruiser, took the lead in the T2 category on stage four. The Catalan rally star then consolidated his lead and entered the final day of the 9,000-kilometre rally with a 17-minute lead over nearest rival, Nicolas Gibon. 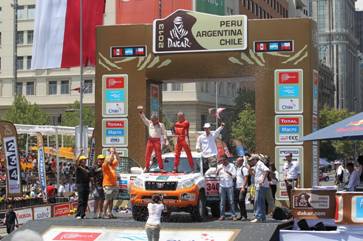 An exciting duel between the T2 frontrunners on the final stage made for a tense day in the Foj camp, but the Spaniard expertly negotiated the route from La Serena to the finish line in Santiago over 13 minutes clear of Gibon to seal the T2 class title for the second year in succession, finishing 27th overall in the car standings.

More success for Cooper racers followed as the Race2Recovery team – made up of injured servicemen and able-bodied civilians – overcame the physical and mental demands of the 15-day challenge to become the first disability team to complete the Dakar Rally.

Major Matt O’Hare and Corporal Philip ‘Barney’ Gillespie used their Bowler Wildcat on Cooper Discoverer STT tyres to cross the finish line in Santiago and seal their place in the history books, embodying the team’s motto ‘beyond injury, achieving the extraordinary.’

Captain Tony Harris, a below-the-knee amputee who was integral in getting the Race2Recovery team to Dakar but retired early in the rally, paid special thanks to Cooper for its continued support of the team’s mission, saying, “The support we received from Cooper was invaluable; the tyres were phenomenal and Matt and Barney didn’t get a puncture during the whole Dakar race.”

Speaking after the rally, Gillespie hoped that the team’s achievements would inspire others, saying, “I don’t think it’s sunk in yet. We’ve just taken it stage by stage and now we’re here at the finish. There were times when we were tackling huge sand dunes in the middle of the night, that we thought we couldn’t possibly continue but somehow we kept each other going. Like so many of the team, I’ve experienced some dark times over the past few years and I hope that by completing the Dakar I’ll inspire others to take on extraordinary challenges.”

Sarah McRoberts, European Marketing Manager for Cooper Tire Europe, praised both Foj and Race2Recovery for their ‘extraordinary’ achievements, saying, “The Dakar Rally is regarded as the world’s toughest rally with good reason; the terrains and altitude that the crews and tyres are forced to deal with, combined with the navigational demands of the course make the rally tough for even the most experienced competitors. 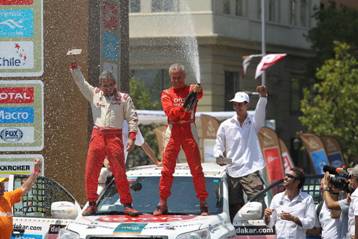 “T2 class victory for Xavi Foj in 2012 was a phenomenal achievement, but to go back and repeat that in 2013 is quite incredible. Once he took the lead, he masterfully struck the balance between conservative driving and being aggressive and we’re proud to have supported him on his way to victory.

“As for the Race2Recovery team, it’s hard to put into words quite how special this achievement is. The crews, mechanics and supporters have been on a real rollercoaster of a journey and their first week was beset with problems, so I’m absolutely delighted that they’ve achieved their goal and made history against the odds.”