HomeBrandsContinentalContinental Tyres Irish Car of the Year returns for 2022

The pandemic has affected every aspect of life in Ireland over the past two years and it particularly hit the motor industry in a very hard way.

It also lead to the cancellation of the Continental Tyres Irish Car of the Year awards programme in 2021.

However, the Irish Car of the Year Committee is eager to get the programme back on track and to ensure that the awards for the best cars on the Irish market be given out for 2022.

According to Joint-Chairman of the Irish Car of the Year Committee, Anthony Conlon: “It is an important service that myself and the other motoring journalists who vote on the awards provide to the Irish car buying public – we help to make sense of the mind-boggling array of cars that are launched here each year, highlighting the best models in each category that are best suited to the needs of Irish drivers.

“And even though the pandemic has caused some disruption and delay in the production of some models, there has still been an impressive crop of cars for us to judge as part of the 2022 awards programme.”

“That said, there are still many exciting new petrol and diesel models being launched as well as an ever increasing choice of hybrid options, ensuring there is a vehicle on sale to meet the needs of every Irish customer.”

Tom Dennigan of awards sponsor, Continental Tyres, said: “We are delighted to be back with the awards programme for 2022. Two years ago in 2020 when we last named an Irish Car of the Year winner, it was the Kia e-Soul, the first time that an electric car has won the title.

“Two years ago, the e-Soul was very much in the minority among the eligible cars as only a small number were electric.

“Now, in spite of the pandemic, just look how the picture has changed with half of the entrants being available as full electric vehicles – there can be no more stark indication of the revolution that is occurring in motoring today.”

A field of 34 candidates is eligible for the 2022 Continental Tyres Irish Car of the Year awards. The category winners and the overall winner of the coveted title will be announced in early February. 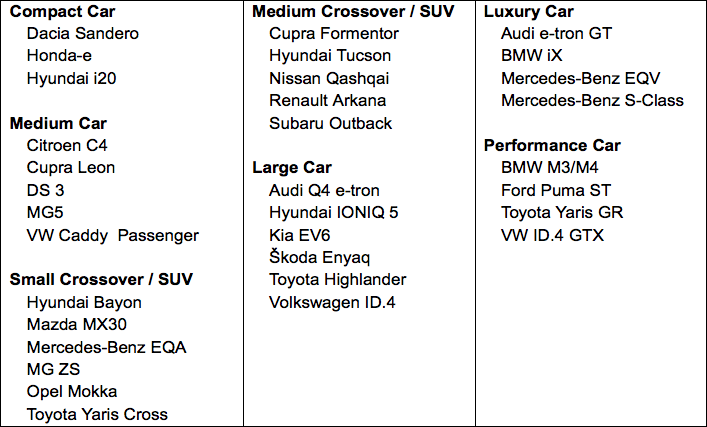