The venue was the INTA (Spanish Institute for Aerospace Technology) test track in Viemes, near Madrid. “We wanted them not only to experience the performance of the tyres but also to show our guests the lower total cost of ownership of  Continental industrial tyres,” said David Alonso, Spanish Director of Marketing and Sales.

The organisers had put together a series of tests in which different tyres could be tested on the same vehicles and under the same conditions The vehicles from Still, Jungheinrich, Caterpillar, Linde, and Hyster were fitted with Continental tyres and those from competitors.

In the tests, the drivers quickly noticed the differences in vibration suspension characteristics and rolling resistance.  In one case ContiRV20 radial tyres were compared to a competitors tyre on a tractor and the competitors tyres showed a very different  wear pattern – a clear indication of the  superior durability of the Continental tyre.

Less rolling resistance less energy
Continental tyres also came out on top in rolling resistance: The vehicle with Continental CSEasy SC20 tyres rolled from a ramp about 20 meters further than the one on competitors tyres. In a continuous operation, the temperature of the Continental tyre also remained  lower than the competitor also an indication of lower energy usage. In one test-run a competitors tyre  overheated and  and disintegrated. Also as the CSEasy SC20 uses  less energy the vehicle can travel further in a given time..

“We even convinced our more critical customers with the  outstanding performance of our  tyres ,” marketing director Veronica Lucas resumed. “The Conti Live Action showed  the real benefits of Continental industrial tyres  in everyday  work and how these contribute to lower operating costs ” 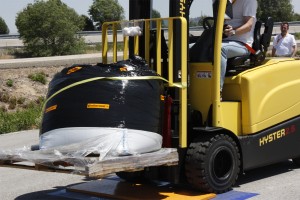