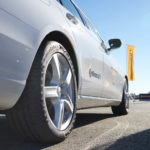 Yokohama has announced a new tyre along with further new OEM fitments reinforcing its commitment to continuous development and performance in both fields.
Read More

Toyo Tire’s NanoEnergy brand tyre has been adopted by Toyota as the original equipment tyre for the new Prius, which went on sale in December 2015 in Japan. NanoEnergy is Toyo’s global fuel-efficient tyre brand. In order to strike a balance between fuel efficiency and wet grip performance, Toyo Tires developed Nano Balance Technology, a
Read More

Tyre maker Hankook will be supplying its tyres to the new BMW 7 Series as original fitment. The new generation of the BMW Group’s luxury car will be fitted with Hankook’s ultra-high performance summer and winter tyres, Ventus S1 evo2 and i*cept evo, both in runflat versions. The tyres have been developed in the company’s German-based
Read More

The DX240 tyre from Davanti proves that performance and comfort can come in any size as the low-noise, small passenger car tyre hits UK and Ireland this month.
Read More

Goodyear is showcasing its latest summer tyre at the Geneva Motor Show this week – the Eagle F1 Asymmetric 3.
Read More

Japanese high performance tyre manufacturer Yokohama has been chosen by Mazda as Original Equipment for the latest version of the famed sports car, the MX5.
Read More
We use cookies to ensure that we give you the best experience on our website. If you continue to use this site we will assume that you are happy with it.OkRead more