Tyre manufacturer, Apollo Vredestein has been awarded the Silver partnership status by the Freight Transport Association (FTA). Less than a year after joining the Van Excellence scheme as a supporting partner, Apollo Vredestein has achieved the Silver status in recognition of the role played by the brand within a scheme promoting compliance, road safety and
Read More

Pedro Matos, Apollo Tyres chief quality & business excellence officer will now head the company’s OE strategy and sales for passenger car tyres in Europe. Matos has over 25 years’ experience in the tyre industry in a range of different roles, and has worked directly with several major European OEMs in quality, R&D and sales
Read More

Tyre manufacturer, Apollo Tyres has earned top place in German test body ADAC’s latest summer tyre test, which looked at commercial van tyres for the first time. The Apollo Altrust was given the highest score out of 16 tyre models tested in this category. The test analysed 16 tyres in the 215/65 R16C 109T size. The 13 criteria
Read More 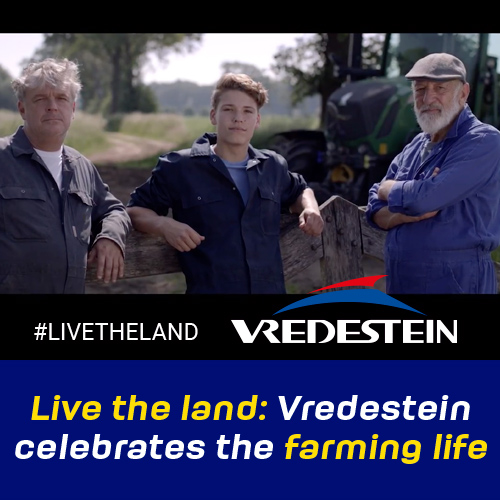 Premium tyre brand, Vredestein – available in Ireland from Modern Tyres – has produced a promotional movie honouring farmers, their connection to the soil and the hard work they do every day.
Read More

Premium tyre manufacturer, Vredestein says it has the answer to the colder regime expected to hit the UK and Ireland in the next few weeks with its winter tyre segment.
Read More

European premium tyre manufacturer, Vredestein is to supply its award-winning Quatrac 5 all-season tyre as standard fitment on the latest Ford Fiesta. The reputation of Apollo Vredestein among the world´s leading vehicle manufacturers is growing, a fact proven by the recently increasing amount of original equipment fitting endorsements, according to Apollo Vredestein.
Read More

When performance and control on all kinds of grounds is important, there is no better choice than a set of Apollo Vredestein Quatrac 5 all-season tyres.  Kidderminster Harriers Ladies FC player Lauren Wyatt knows how to get the most traction both on a football field and on the road. She took delivery of her Quatrac
Read More

Global tyre manufacturer Apollo Tyres has launched a brand-new winter tyre, the Apollo Aspire XP Winter, in response to sustained demand from the market. The new addition brings the tyre brand´s winter assortment up to 60 products, ensuring an optimal coverage of most popular sizes. The tyre will soon be available in 23 sizes. The
Read More

Vredestein’s extensive all-season tyre range is perfectly positioned to answer a trend which shows significant growth of all-season SUV fitments. Vredestein’s SUV range saw a 15 per cent increase in sales last year, and an even more dramatic increase for ultra-high performance all-season tyres which grew by 40 per cent over last year. Additionally this
Read More

European brand Vredestein’s Snowtrac 5, the award-winning winter tyres, feature in the Rallye Monte-Carlo Historique 2018 as the tyres of choice on the 1971 Porsche 914/6 belonging to Scottish businessman Sandy McEwen, whose co-driver, well-known Glasgow architect Alan Stark, is one of the Scottish rally scene’s top navigators. Only cars which participated in the Monte-Carlo
Read More