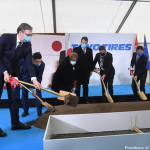 Toyo Tire Corporation has broke ground on its new €382 million tyre factory in Serbia’s Indjija. The factory is set to open in April 2022 and
Read More

Toyo Tires will be exhibiting at 28th edition of Autopromotec at the Fiera di Bologna, from May 22-26.
Read More

Toyo Tire UK Ltd, has once again decided to leap into the muddy pit of off-road adventure by teaming up with Tough Mudder for a second year running to sponsor and support the globally renowned series of mud runs.
Read More

The Toyo Tires 7 Race Series has been announced for a further two seasons.
Read More

Throughout 2018, Toyo Tires sponsored 21 different race championships, playing a pivotal role in encouraging first time drivers, newcomers to racing and established pros to get behind the wheel of all manner of exciting machinery and enjoy some of the UKs most scintillating tracks.
Read More

Mitsubishi Corporation has approved the purchase of an additional stake in Toyo Tire & Rubber Co. It is doing so by way of a subscription to a private placement of shares. And as a result, it has entered into a capital alliance agreement with Toyo Tire. The major purchase of the additional shares will increase
Read More

Toyo Tire & Rubber Co., Ltd. has developed a new device that effectively reduces resonance in tyre cavities, a source of interior noise. The new device is based on new technology called “Toyo Silent Technology” which solves the issue of sound that is transmitted from the tyre to the interior of a vehicle. As hybrid
Read More

Toyo Tyre UK Ltd, makers of some of the world’s most capable off-road tyres, has announced an expanded programme of sponsorship activities, one which will see it partner with the Tough Mudder series of endurance events. It’s a move which promises to benefit both parties, not forgetting those drivers that rely on Toyo rubber on
Read More