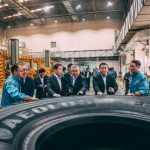 Apollo Tyres were this year’s sponsors of Truckfest, the biggest truck festival in Europe.
Read More

The Aeolus Tyre Company, which has been in the tyre manufacturing business for over 50 years is exhibiting at the Auto Trade EXPO for the first time ever, in association with Cork Tyre Wholesale. Drop by the stand and enjoy some refreshments, meet representatives and find out any information that you require about Aeolus Tyres.
Read More

Aeolus Tyre, a company owned by the Chinese group Chemchina, will be a first-time exhibitor at top international trade fair Reifen in Essen. Aeolus Tyre manufactures tyres for cars, SUVs and vans, as well as for the sizeable segment of commercial vehicles, earth-moving machinery and agricultural equipment. These tyres are already trusted by several million
Read More

The China National Chemical Corporation’s (ChemChina’s) bid to gain operational control of Pirelli & C. S.p.A. is going ahead. Reports say that next Tuesday (August 11th), will see further official steps taken by both sides towards the completion of a very complex deal. This follows news yesterday that the ChemChina/Camfin deal cleared all antitrust and
Read More

Aeolus is expanding it HP and UHP winter tyre ranges as well as its All-Season tyre ranges for Western European markets.
Read More

Dublin-based tyre wholesaler Kings Road Tyres (KRT) will be following up a successful first appearance at Auto Trade EXPO last year, with a major presence at the 2015 show this October.
Read More

Sean O’Connell Tyres in conjunction with Richard Looby Tyres have represented the Aeolus car, van and 4×4 tyre range to great effect in Ireland over the past two years and with JB Tyres being appointed sole distributors for Northern Ireland, the brand is growing at a pace.
Read More

Aelous in conjunction distributor, Kings Road Tyres is exhibiting its full range of truck tyres, covering all applications at the Commercial Vehicle Show at the NEC in Birmingham this week.
Read More