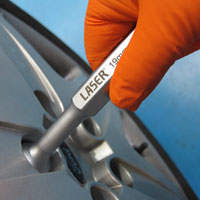 Laser Tools has launched a new tool that speeds up wheel fitting and avoids wheel nut cross threading. Wheel fitting: you’re balancing the wheel on the hub or on the studs and as the road wheel wobbles about, it can be very fiddly getting the wheel bolt or nut to start threading squarely without cross
Read More

Oops they did it again… as the first tuning company in the world! The crew of Wheelsandmore did not hold back from the currently sharpest weapon born in Maranello, the strongest 12-cylinder engine with 800hp and presents fine upgrades that will be at least as unreasonable for the “average citizens” as the car itself. 800hp
Read More

Tyre maker Hankook has won Bronze at the international Epica Awards for its informative campaign #Drive like a woman. The campaign was initiated jointly between the Swedish non-governmental road safety association NTF and Hankook Tire Sweden as statistics have shown that men and especially younger men aged between 18-25 years are more likely to have
Read More

Philips Automotive Lighting has uploaded a number of useful step-by-step lighting fitment videos for technicians on its own youtube channel.   Cars vary hugely in complexity. For some cars it’s relatively simple to open the bonnet and get to the back of the headlight, remove the old bulb and replace it with a new one. On
Read More

The Environmental Protection Agency (EPA) is advising battery distributors of there obligations, under the battery regulations. The EPA says defines a “distributor”as any person who provides batteries on a professional basis to an end-user. To ensure compliance as a distributor of batteries you are required to do the following: Waste industrial or automotive batteries should
Read More

Laser Tools has launched a very useful and versatile ratchet screwdriver, which is supplied with 20 screwdriver bits plus nine 1/4″ drive sockets. With a super-smooth but very robust 36-tooth ratchet this screwdriver is comfortable and well-balanced and has additional storage for six bits in the handle. The standard (removable) shaft is 125mm long and
Read More

Davanti Tyres took a group of 40 of its  key UK & Ireland customers on a ‘once in a lifetime’ three-day driving experience through the south of France and Monaco in September. The trip included the use of an incredible fleet of classic sports cars, driving some of Europe’s most scenic roads including stages of
Read More

Now is the time to prepare your car for the Winter conditions that lie ahead, tyre manufacturer Michelin advises. In winter, as temperatures head into single figures, the advice is that motorists would fit tyres designed specifically for winter conditions with compounds that remain flexible to improve grip and braking. In this respect, the launch recently of
Read More

The Irish Tyre Wholesalers & Retailers Association (ITWRA) is holding an important meeting in the Killeshin Hotel, Portlaoise, on Thursday night, November 9 at 7.00pm. The meeting was addressed by Dominic Henry of PRL Ltd., who will explain the reporting procedures associated with the so-called “Black Box”. It is in the interest of all importers
Read More

The growing world population is presenting enormous challenges for the agricultural industry. The United Nations estimates that by 2030, enough food will have to be supplied to meet the needs of around 8.5 billion people. At the same time, the amount of space available for agricultural land is dwindling all the time, which means that
Read More