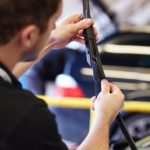 Wiper blade manufacturer, Trico, has produced hundreds of fitting videos on its YouTube channel to ensure that every technician can fit wipers blades with ease.   For the past nine years, original equipment wiper blade manufacturer, Trico, has created hundreds of fitting videos for motorist and professional alike, through YouTube.  While wiper blades are perceived as a relatively easy product to fit, many drivers still struggle, which creates anobvious revenue stream for workshops to capitalise
Read More

With the August Bank Holiday approaching, some will be jumping into their cars and heading off on a well-earned staycation. For those who haven’t switched to an electric vehicle and are still driving a petrol or diesel car, the Sustainable Energy Authority of Ireland (SEAI) has some tips to help you drive more efficiently. This
Read More

European Tyre Distributors B.V. (ETD), which specializes in the import of Asian tyres for the European market,  has had its previously announced acquisition of a majority stake by Mahansaria Tyres Private Ltd (MTPL).  completed. As a result, EATD has relocated its operations from the Netherlands to Germany.     In recent years, European Agriculture Tyre Distributors B.V. has
Read More

The Government says that yesterday’s package will support those whose jobs are most at risk, and provide opportunities for those who need to reskill or find different work, as well as supporting businesses to stay open. Ireland’s economic recovery needs to sustainable and durable, not just from an economic point view, but from an environment
Read More

Michelin has introduced a next generation version of its popular MachXBib agricultural tyres, with a revised tread pattern that improves endurance, traction and resistance to stubble damage – amongst a host of other performance benefits. Ideal for high horsepower tractors, delivering between 160-300hp, the new MachXBib design will initially be launched in three sizes traditionally
Read More

FG Pryor & Son has chosen an identical set of VF 380/85 R34 149A8/B TL Michelin YieldBib tyres for its Bateman RB35 sprayer, after being hugely impressed with the performance of the original equipment rubber.
Read More

Following the first virtual leg of the BKT Tractor of the Year (TOTY) 2021 program, where the project took shape, the second program will feature BKT and creators addressing one of the most topical issues, for its impact both globally and on agriculture, digital connectivity.
Read More

Following the British government’s announcement of the reintroduction of mandatory MOT testing as of August 1, TyreSafe is urging drivers to check their tyres before they book their tests.
Read More

Triangle Tyre is once again among the top 10 automobile tyre brands, according to the recently released China Brand Power Index (C-BPI) 2020.
Read More

Michelin is urging farmers to pay close attention to the health and condition of their tyres as they head into the harvest season.
Read More